skip to main | skip to sidebar

Raising Worms and other UPDATES

I have been playing with the idea of building a worm bed and this week I have made the leap. I tried doing this with NO BUDGET in the past with a very primitive cobbled together setup of empty kitty litter containers and I realized that SIZE does matter! I also share a home with my partner and I quickly found out that aesthetics is very high on the list for a happy home life. 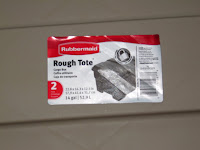 I went to our local Big Box Store (Costco) and bought a two pack of Rubbermaid Rough Tote cargo boxes. These are 22.8 X 16.3 X 12.5 inches and in a beige/tan color. Light does NOT pass through the sides and the lids have a very nice locking latch. I drilled a series of 5/32-inch holes in the bottom of one container (24 holes evenly spaced and also drilled holes around the top approximately 2 inched down from the upper lip. This is to allow for drainage and air circulation.

I choose this size drill bit for two reasons, I had it and it was a good compromise for the size holes I have read about on the Internet. Most sites recommend a 1/8-inch hole on the bottom to allow for drainage of liquid build up but not large enough to allow your wiggles to get out. The air holes around the top lip can be approximately ¼-inch to allow airflow but not let to much light in to annoy your worms. I have seen some sites that call for larger air holes for better circulation and some even get into the 1.5 to 2 inch sizes and place a net or screen over the holes. This may be a modification in the future if needed.

We get a weekly magazine in San Diego that is available at most store for free. One READER torn into inch strips is enough to fill the box about ¾ full before moistening the paper. I found out the paper should be moist by not soaking and that the worms will use this as bedding.

I have been running my kitchen waste through a blender recently to aid in reducing my processing times in my compost tumbler. I took about 2 cups of this chopped and drained mash and spread that over the moist paper.

The final layer in my worm bed is made of a layer of previously composted material from my winter compost. This was collected and screened before I was composting my worms to death. During the winter I was able to keep red wigglers going in my compost bin but that has changed. I don’t know if it is just that it is getting warmer or I am getting better at getting the temperatures up in my composter (the right mixes of greens and browns).

My last red wigglers were a spur of the moment purchase at a local bait shop. I just dumped them into the composter and I was amazed at how quickly the one little tub of wiggles soon filled up the tumbler. They did great and the compost during that period always seemed to have lots of worm eggs.

I placed the un-altered cargo box on a rolling pot stand (for ease of moving and tending to the farm). In the bottom of this box I placed two broken pavers. This will provide addition airflow (it raises the holes on the worm box) and in the event that any worms do work there way outside of the box they then have something to climb up on to keep from drowning. You may ask what I mean by drowning? Worm farms will produce “Worm Juice”.

The following information is from the Ashfield Council website (http://www.ashfield.nsw.gov.au/page/composting_and_worm_farming.html) but I did do a spell-check on it and changed some of the words to U.S. English spelling. Not to say that the words were spelled wrong, just not AMERICAN.

The two products produced by your worm farm are ‘worm juice' (the liquid that drains directly out of the farm) and ‘vermicast' (or worm poo). Both can be used as plant fertilizers indoors and out but should be applied in moderation.

Worm juice collected direct from the farm should also be diluted to a weak tea color before applying to plants. This is especially important for pot plants. Vermicast can be dug directly into the soil of your garden, but you shouldn't place large amounts directly near the roots or stems of plants as it is nutrient rich and has the ability to over-fertilize your plants. Vermicast can also be mixed with water to make ‘worm tea' which can be watered on plants and lawns and which is less potent than applying solid vermicast directly. Mix a handful of vermicast in a bucket of water to make a weak tea colored brew.

Worms eat half their body weight a day

Worms are hermaphrodites, but need two worms to mate

You can tell a worm is ready to reproduce when it has a distinctive ring around it's neck.

Worm eggs are small yellow spheres about 3mm in diameter. Look close and you can often see them in your worm farm

Worms will double in number every 2 or 3 months

Worms regulate their own population size according to the limitations of their environment, e.g. how much space and food they have, so your farm will never be overpopulated. If only humans were as smart!

There are a lot of worm farming sites on line but this is one that is pretty easy to understand.

I put my FARM together today and decided to see how long it would take my worm eggs to hatch and start coming up some worms that I can see. If I don’t see results in a timely manner I might either opt for another trip to a bait shop or ordering some worms online or look for a local supplier.

I intend to be careful with my bin and work with keeping the temperature in a workable range, keep the lid in place to keep down unwanted flies and pests, and learn how to make sure that I don’t come up with an ODOR problem (again, I want to maintain a happy home life).

I look forward to seeing if worm casings and worm casings make a visible difference with both my container plants and my garden veggies.

A couple of other hot topics at home is that fact that we are probably going to be getting solar panels installed to help offset our power consumption and give us a better feeling about being greener. The solar site evaluation was done yesterday and the readings put us in around 97-98% efficiency and we are working with a company called Akeena Solar. They have a couple of different options available and it looks like the “TIME SHARE” plane is the one we will go for.

You have a lower down payment and then you have a fixed monthly bill to the solar panel folks. They maintain the panels, clean them and they get the tax credits but that is the trade off for not having to front the total cost. The cost over 18 years comes in around $2300.00 instead of $18,000 up front and around 5 to 6 K tax credit at the beginning of the year. If I opted for buying outright I would do away with most of my electric bill but then I would have to maintain the system, work on the finance and file the tax paperwork. With the time share plan it is around $2500 to $3000 down and around $90 a month to the provider on top of whatever is left over for the electric company. It gives me a very feel good warm fuzzy feeling and that is all that really matters.

The other thing is the Grounds to Gardens program at Starbucks. You just call up, ask them to save you some used coffee grounds and then you have input for you compost bin or new worm farm.

Stay in touch; let me know what you are thinking and what you think about what I’m doing in San Diego.

Thom
I was born in the Chicago, Illinois and spent my formative years in a small community known as Wonder Lake. I moved to Greers Ferry. Arkansas while I was in high school. I joined the Navy as a Photographer and retired after 20 years as a Petty Officer First Class Photographers Mate. I now live in the San Diego, California.