skip to main | skip to sidebar

We are now a TWO COMPOSTER family...

I am sorry for the delay in updating but work has been all consuming for a while. I also tend to shut down a little bit when the weather turns cold and the sun doesn’t shine as much as I would like. 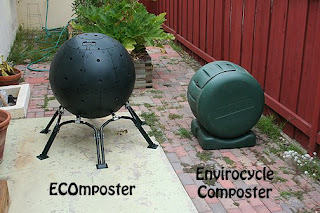 I have been using my Envirocycler Composter for a few months. I have decided that to get the most out of my composting experiences I needed to get a second composter. Since it takes about 3 to weeks after putting food scraps in I either was running into storage issues. I was also over-filling the composter and making it hard to tumble. The hoarder in me is having a hard time letting the smallest scrap of vegetable scraps going into the garbage.

I was at COSTCO recently and saw a composter tumbler that just seemed to have everything going for it. It was on sale and reasonably price thru Costco on line. The cost was 199.99 plus tax for a final total of $217.49.

The Envirocycler and the ECOmposter do have different compost volumes, 52 gallons for the Envirocycler and 71 gallons for the ECOmposter. The BIGGEST difference was that the Envirocycler is basically ready to go out of the box and the ECOmposter with base has 586 pieces that need to be assembled. It took me three nights to put it together but on a scale of 1 (EASY) to 10 (DIFFICULT) this would be a 3. The directions are very easy to follow, the tools needed are minimal, and a lot of the steps are repetitive. The hardest step for me was putting the two halves together due to the 32 tabs that need to line up. I must say that it did give me a very good sense of accomplishment to get it completed without having to ask for help.

I have been using the Envirocycler a little over 6 months now and I have found a few issues with it. (1) The door/hatch will let some compost leak out when I am rotating it. I don’t know if it is due to the way it connects to the drum or the fact that it is a single point attachment and a single point hook. I would like to see a better hinge design. (2) If I do over fill it the compost becomes hard to keep centered when tumbling, likes to drift to one side or the other and then the rollers get a little clogged with the compost that leaks out from the door. (3) The final issue I have is with the compost tea part of the build. The cap for the tank is very poorly fitted. The cap is very loose and the thread that are supposed to hold the cap are not very precise. This in conjunction with the way the tank is formed makes it a little hard to empty the tank without having a lot of the compost tea sloshing around when I try to pour it out.

With all of these faults that I have pointed out ( and I have to admit that these are just issues that I have encountered) I would still say that the Envirocycler is a very good product. Would I purchase it again… I think that I will see how the ECOmposter works and then I would make a final decision.

I did buy another tumble composter in the past. It was made out of a recycled 55-gallon plastic drum and tumbled on a horizontal axel. It was just one step up from homemade and I feel that technology has come a long way. I look forward to being able to give an informed review on my new composter soon.

This looks like it is going to be a good year for my avocado tree this year. Lots of small fruit and the fruit seem to be staying on the tree this year. Also have fruit setting on my orange and lemon trees. 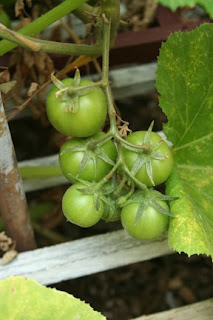 In the garden plot itself are zucchini, garlic and tomatoes. This year I am mainly growing tomatoes grown from seeds collected from COSTCO tomatoes. May have a little bit of fusarium/verticillium wilt. I guess that next year I will getting plants labeled VF at the nursery to overcome this issue. I did grow a type of tomato last year called Juliette (a grape tomato) but was unable to find it this year in the nursery.

I have been going on line and saw directions for an upside-down hanging planter. I know have another tomato plant growing in the back yard and we will see how it does. I kept seeing the ads on late-night television for a very similar product and I kept debating about buying the product but just couldn’t bring myself to order it and pay SHIPPING & HANDLING. That phrase always bothers me, S&H.

Ron is getting ready to get out of school for Summer Break and his band is getting a few gigs so he is having fun. BubbaJam is the band and I go along and help hump some of the equipment… just call me a roady. Nobody in the group really drinks but they usually get a meal as part of the deal and I have a habit of going anywhere for free food.

We have been doing our part to bring clutter under control at the homestead… freecycler and Craigslist are getting a lot of use. Ron still get a thrill every time he puts a listing on Craigslist… it is almost like he clicks the stopwatch and sees how long it takes to get a reply. The one thing we have found out is that if something doesn’t sell on line the first time you list it you need to have patience and repost it again, and again as needed. Some stuff has lasted 15 minutes before a buyer was found and other things have take a couple of weeks to a month but eventually stuff sells.

We don’t have travel plans for this year… staying close to home, garden and band gigs. Our household is very happy with Obama and even with everything that is going on with the economy we still feel better and happier than we were at this time last year… what a difference a day can make and a President… so much for my political rant.

We love this spinning composter. It has greatly simplified the composting process and the biggest benefit is it is clean, doesn't smell and I don't have animals crawling through it. Also, compared to other units the price is great.

Thom
I was born in the Chicago, Illinois and spent my formative years in a small community known as Wonder Lake. I moved to Greers Ferry. Arkansas while I was in high school. I joined the Navy as a Photographer and retired after 20 years as a Petty Officer First Class Photographers Mate. I now live in the San Diego, California.